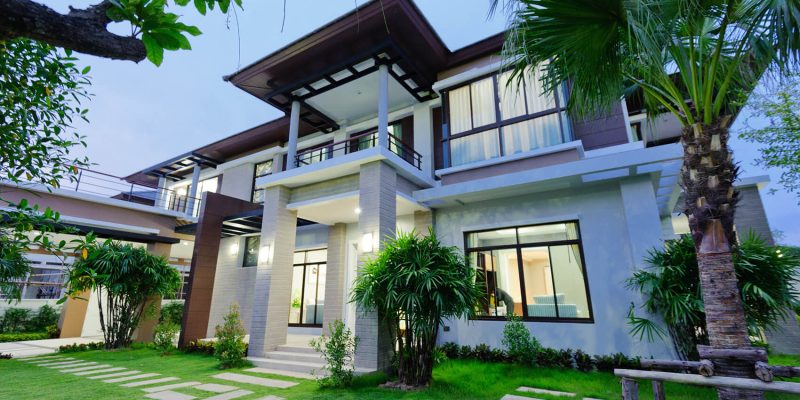 Ministry of Development data say that bioclimatic houses show energy benefits of up to 80%, compared to older and/or conventional buildings. These houses are based on a bioclimatic design, namely an indoor and outdoor design, based on the small scale of the area, with the aim of providing thermal and visual comfort through the exploitation of natural environmental phenomena.

Bioclimatic architecture is one of the most important elements of ecological construction, which focuses on the control and management of environmental parameters at the level of building units, carrying out studies according the following directions:

In Greece, the building sector is responsible for 40% of the final energy consumption (thermal, electrical), which, due to its high cost, results in burdening the building’s owner and in increasing air pollution, mainly, with carbon dioxide (CO2). However, bioclimatic design applications are spread both nationally and internationally. Indeed, several states have adopted and enacted relevant legislation to design and develop residential units and individual buildings, according to bioclimatic architecture principles.

In more detail, in Greek society, a bioclimatic house can save up to 30% of energy compared to a conventional building. It is noteworthy that savings can be as high as 80% compared to an older uninsulated building. These savings are not only about the annual energy costs, but also about the reduction in the size of electromechanical installations.

There are also environmental and social benefits, as emissions are reduced and quality of life improved. More specifically, the benefits are numerous and related to the thermal protection of buildings throughout the year, with the application of appropriate techniques to the building shell (thermal insulation, airtightness of the openings, shading). At the same time, a key ingredient for bioclimatic design is the utilization of solar energy, not only for indoor heating, but also for natural lighting throughout the year.

Solar energy is used for buildings’ heating and cooling with the support of two technological systems, passive and active. However, in recent years the hybrid system has become increasingly popular.

More specifically, passive systems exploit solar energy without resorting to high technology and mechanical means. The application of these systems is based on the natural flow of thermal energy, taking advantage of all the physical properties of building materials and using the building blocks (walls, floors, ceilings, roof) for solar energy collection and heat storage. Passive systems can be divided into three major categories, depending on the purpose of their use and application:

Active systems require the use of mechanical means, from simple to high technology (pumps, heat exchangers, fans, etc.). At the same time, their use requires a complex set of mechanisms for collecting, transporting and storing heat, a product of captive sunlight. In any case, in order to achieve the expected benefits during the whole year, these systems must be combined in their operation (Axarlis, 2009).

The most well-known and accepted bioclimatic design techniques fall into the following categories:

Orientation. The most correct shape for a building, as far as energy is concerned, is the one where small heat losses are detected in the winter, while solar gains are the least possible in the summer. It is also worth noting that the microclimate on each side of the building also plays an important role.

More specifically, the north side is the coldest, as it is not receiving direct sunlight, while winds are heading north during the winter. The east and west facades receive the same amount of solar radiation, with the west side remaining warmer due to solar radiation and meridian air temperatures. The south side is both the brightest and the hottest, receiving solar radiation throughout the day.

However, rooms with less temperature requirements must be located to the north, thus acting as a barrier to heat loss, thereby regulating the interaction of heated rooms and the outdoor environment. The most correct orientation for the layout of openings in a building is the south. Focusing on Greece, the optimum scheme for maximum-sunlight exploitation is elongated along the axis East-West, however, any possible slight deviation of approximately 20° does not have any catalytically effect on the final performance of the south-oriented openings (Papamanolis, 2015).

Shading. Shading plays an important role in the design of a building. The purpose of shading is to control the amount of incoming solar radiation from the openings. The contribution of shading is great, as it saves a significant amount of energy for heating and cooling the building, creating thermal comfort conditions, while also regulating the intensity and quality of natural lighting, reducing the likelihood of blur. The type and dimensions of the system are predicted by a number of factors, including the orientation, the location of the exposures, and other factors, such as:

Sun protection systems fall into two categories, mobile and fixed. On the one hand, fixed shades are in the form of an extension of the slab, vertical and horizontal projections, but also of horizontal concrete and / or metal roofing at the height of the window. Mobile shades, on the other hand, take the form of additional sunscreens made of lightweight materials (metal, aluminum, plastic, wood) that can even be rotated manually or automatically following the sun’s trajectory. In addition, outdoor green spaces, with the help of direct shading that can be achieved by trees, as well as with the help of lower vegetation, which, thanks to the dominant green color, significantly reduces the amount of sunlight falling on the ground, while also improving the conditions for natural ventilation. In this way, the exterior spaces help to provide a sun-protective building (Iliakis, 2015).

Natural ventilation is achieved by the following techniques:

Natural Light. Natural lighting contributes significantly to the visual comfort of the building as well as saving electricity. However, natural lighting contributes significantly to the wider improvement of living conditions within the premises, combining light, view, ventilation, utilization and regulation of incoming solar energy. In order to ensure visual comfort, it is a prerequisite to utilize natural lighting using the most appropriate systems and techniques, which ensure an adequate amount of lighting (lighting level) in the interior and smooth distribution, avoiding significant variations in level. These variations can lead to the “glare” phenomenon regarding the work carried out in the premises. Adequacy and distribution of illumination are the products of the geometrical elements of space and apertures, but also of the photometric characteristics of opaque surfaces, in color and texture, and the glazing, in photoperiod and reflectivity (Kosmopoulos, 2008).

Renewable Sources. Bioclimatic design is for the most part renewable energy sources, including solar and wind energy, geothermal and biomass. Renewable sources of energy provide the building with electricity, hot water and efficient heating/cooling (Res Dissemination, 2001).

Planted Roof. Planted tiles are one of the oldest techniques preferred in bioclimatic design. In more detail, a planted roof consists of a layer of vegetation on a flat roof. This roof can help to create a cooling effect both around the building and inside the building, providing thermal protection during the summer as well as during the winter, as it is a means of thermal insulation. Indeed, in large urban cities, during the summer, where the atmosphere can be characterized as stuffy, green roof coverage affects the microclimate, leading to a reduction in the percentage of toxic atmospheric pollutants, as well as in energy consumption, up to 30% (Papamanolis, 2015).

Insulation-Thermal Inertia. Insulation and thermal inertia contribute to the heat capture inside the building, thereby reducing heat loss in winter and reducing solar gain in summer. Also, in this way, increased levels of thermal inertia are observed, meaning a particular defense of the building to external temperature changes. Examples are mass walls, thermal storage walls and Trombe walls. However, a bioclimatic building is slightly more expensive than an old or conventional building. In any case, however, energy savings bring in multiple profits compared to the initial cost of the building in the long run. Therefore, the benefits of this type of design are both energy and economic and environmental. However, in order to accomplish all of the above, a careful and proper design are essential for the principles that must be applied throughout the construction without deviations (Papamanolis, 2015).

Bioclimatic homes are not a finding of the 20th century. Bioclimatic houses appear during 450-479 BC in ancient Greece. A typical example is the “Solar House” of the philosopher Socrates. It therefore emerges that from that time there was a great interest in bioclimatic architecture, in order to protect the building from the cold during the winter, as well as the natural ventilation during the summer season. Specifically, the ancient Greeks focused on constructing the north wall of the building thicker than the other walls, preferring the entrances to the east or south. Finally, ancient mechanicals also attached great importance to planting trees and plants to ensure the required shading.

“The future will either be green or not at all”